Summer is ten years old. She lives in the hills of Australia.  Her home is high above the other houses and she has a lovely view from her patio.

One day Summer asked her grandmother, ‘Oma, how does God talk to us?’

It was a good question and we spent some time discussing it.

To answer Summer’s other questions, we are going on a journey of imagination to the celestial city, God’s home in heaven.

It is way beyond our sun and moon, and close to a group of stars called Orion.  You have probably seen Orion on a clear night.  In Australia it looks like a saucepan, but when the right way up in the United States, it represents Orion the hunter.

The three bright stars in a straight line are Orion’s belt,  and  the  three smaller  stars that to us look like the handle of the saucepan are his sword.

The middle star of the sword is the Great Nebula.  It is not really a star, but a giant passageway studded with stars that look like shining jewels.

Imagine travelling through this beautiful cavern with twinkling lights all around you. Even though the stars are out, it is not dark.

Light fills the tunnel, not from the sun or the stars, but from the nebula itself.

Many astronomers who study the stars have spoken of the magnificence of the Great Nebula.

Centuries ago, a Russian astronomer said, “Flamma Orions – is dear to me.  I love it – the wonder of the heavens.”

Another astronomer said, “The Orion Nebula is incredibly beautiful, an explosion of glory in the blackness of space.”

An  Astronomy book says,“Orion is the most beautiful in the heavens.”

A professor who was able to see Orion through the telescope said, “It seems that I was looking through the door to infinity and that the celestial city was not far away.”

And he was right – the holy city of God is not far away, in fact, it is at the other end of the passageway!

Imagine travelling through the nebula, past twinkling stars and the radiance that shines from the nebula, to the holy city, called the New Jerusalem.   Even though the Great Nebula is beautiful, God’s kingdom is far more beautiful.

And there it is --- the heavenly city. We have never seen such magnificence. No artist has seen heaven and no painting can give a true picture.      On the next page the artist’s imagination has given us a little glimpse, but when we see the real heaven, it will be far more glorious, way beyond our imagination. 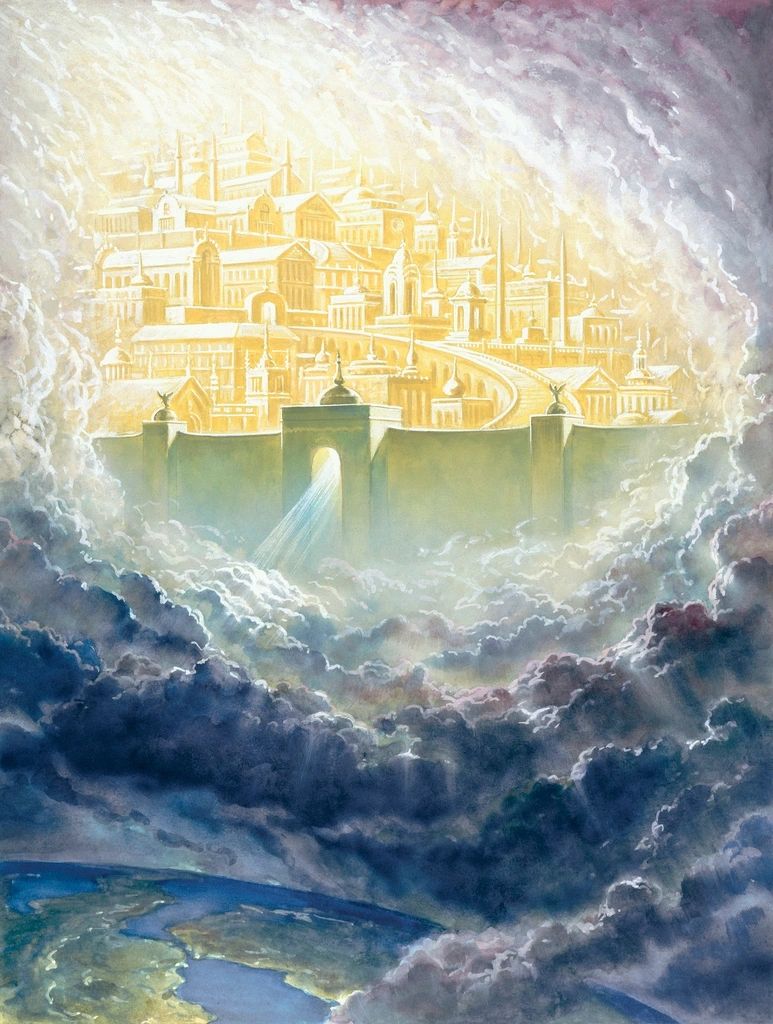 And there it is --- the heavenly city.

We have never seen such magnificence.  No artist has seen heaven and no painting can give a true picture. Here the artist’s imagination has given us a little glimpse, but when we see the real heaven, it will be far more glorious, way beyond our imagination.

The heavenly city has twelve gates, three on each side. Each gate is a beautiful pearl!     Imagine gates of pearl!  On earth pearls are made by oysters, but the gates of heaven are made by God.

In front of the gates is a huge expanse of crystal like a glassy sea. It is beautiful, glittering in the light shining from the city.

Imagine the city’s foundation, actually twelve foundations, one on top of the other, and all made of precious stones.

The first foundation is jasper, a yellow-red gem.  How it sparkles.  The next is a beautiful blue sapphire stone.

Other foundation gems are orange, crimson, mauve, brown, red, and golden-yellow.  The twelfth foundation is Summer’s favourite gem, the purple amethyst. Oma’s favourite is the fourth foundation of emerald, a magnificent green.

So many beautiful, sparkling, precious stones.

In our imagination, let us cross the sea of glass and enter the lovely gates of pearl.

Oh look, the streets are made of transparent gold. We have never seen clear gold.  The precious gems of the foundation sparkle through the golden streets.

The glory of heaven is far more beautiful than we have ever imagined.  It is really too wonderful to imagine, but God has promised He will take us there if we love Jesus and live for Him. Then we can see it for ourselves.

But for the moment, let us try and imagine it.

Look, there is a river. Did you know heaven has a river? Its water is as clear as crystal.    I would love to have a drink, wouldn’t you?

The river flows out of a brilliant light.  It is so bright we can hardly look at it.   I wonder why it shines so brightly. Why does the river flow out of a light?

Oh look, there are two trees on either side of the river! No, they are joined together to make one tree. It is an enormous tree, even bigger than the giant redwoods of California.

It has lots of fruit on it, all different kinds. Count them. One – two – three – four…  How many do you think there are? If you guessed twelve you would be right. There are twelve different types of fruit growing on the tree, and they are ready to eat every month.  I wonder which fruit the tree will bear.   Apricots?  Grapes?  Peaches?

Summer, do you have a favourite fruit you would like?

‘Oooh, I love passionfruit too’, agrees Oma. ‘My favourite is mango.’

This is a very special tree -- the tree of life.

Those who eat its fruit will never die.    They will never get sick or be in pain. Would you like to eat the fruit of this tree?  If you are faithful to Jesus you will eat its fruit.

There is so much more to see, and we could look around a lot longer, but we need to travel back through the star-studded Great Nebula to rest a while from our imagination.

Perhaps next time we will find out about the brilliant shining light.

Why is it so bright?

The Light of God